2010s
LNP has grown consistently over the past 10-15 years and now has a strong niche position in the Nordic M&A market. Today, the main focus lies on international expansion. Currently, LNP is present in a total of 7 countries, among others in the UK, Germany, the Netherlands and all of Scandinavia.

2000s
LNP has reinforced its business acumen with a substantive focus on Mergers & Acquisitions and the Nordic countries as its geographic focus. The firm has established itself in the most important Scandinavian countries.

1990s
LNP expanded its operations and developed some of the business concepts and practices which form the basis of its current activities.

1980s
LNP Corporate Finance was founded in Copenhagen, Denmark in 1987. 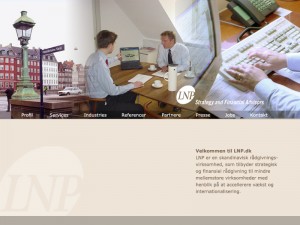